My journey continues with my second hike of the year. I am hiking on the North Country Trail in the Pictured Rocks National Lakeshore, along Lake Superior in Michigan’s Upper Peninsula. 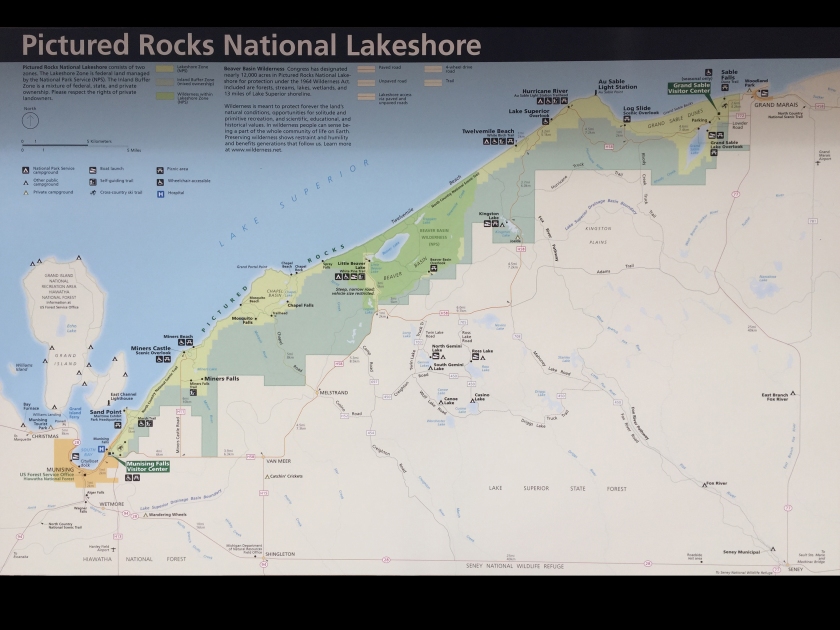 In his masterpiece “Appalachian Trials”, Zach Davis titles Chapter 6 “When Shit Hits The Fan” and he defines Thru-Hiker Fact #1 as: “there will come a time during your thru-hike when shit hits the fan”. He continues to describe a time, when on trail, you will hit a mental road-block, paired with physical, environmental, and logistical obstacles. He concludes his chapter opening paragraph by stating “the trail (just) has a way of testing a person”.

I was fortunate enough to be able to spend Day 3 of my planned 6-day trek, ‘Zeroing’ at the ROAM Inn in Munising, MI – allowing myself and my body to recover from the epic post-holing event and hike out, back to the Munising Falls Visitor Center on Day 2 – all while the weather turned for the worse, temperatures dropped to the low 40’s and it rained for the entire day. 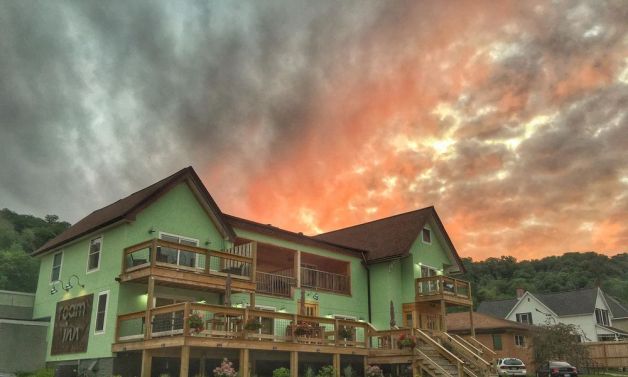 I took advantage of my downtime and revisited every single item in my pack, removing anything and everything I felt was not absolutely necessary, with the biggest weight reduction coming from removing additional camera and photography items that were more ‘nice-to-have’ as opposed to ‘must-have’.

I also revised my itinerary – changing the remainder of my 6-day trek into three individual section-hikes instead of trying to catch-up to my original planned hike and miles. This also allowed me to change the amount of food I was required to carry (basically a pound for each day on the trail), lightening my pack an additional 2-3 lbs.

My journey continues with my second hike of the year …
May 26, 2019, Day 2 on the North Country Trail in the Pictured Rocks National Lakeshore

After a great first day on trail and deciding to get back in my sleeping bag for awhile, I change my plan and hike back to the Munising Falls Visitor Center from the Pictured Rocks National Lakeshore Cliff’s Backcountry Camp Site, all to lighten my pack and leap-frog the vehicle forward along the trail. Two hours into the trek back, I pass back by a hidden waterfall, and then things got interesting (You’ll have view Day 3 to find out what happens!)

My journey continues with my second hike of the year. I am hiking on the North Country Trail in the Pictured Rocks National Lakeshore, along Lake Superior in Michigan’s Upper Peninsula.

I woke at first light, to the sound of a bell buoy ringing in the near distance, and although the temperature didn’t feel necessarily chilly outside, the warmth and comfort offered by my Thermorest Parsec sleeping bag was enticing enough to convince me to just roll over, snuggle in, and drift back off for awhile.

When I did finally start my day, I easily broke down and packed-up camp, in between bites of a Oatmeal Raisin Walnut Clif Bar while sipping Starbucks VIA Pike Place Roast Instant Coffee.

Day 2 on the NCT would bring a number of challenges, beginning with my decision to change my itinerary, and ‘section-hike’ the portion of the trail between the Munising Falls Visitor Center and The Cliff’s. Everything was packed, in its place, and I was on the trail – it was 8:05 AM.

In no uncertain terms, the psychological and emotional struggle is what drives people off the … Trail. It’s the unpredictable and daunting psychological impact of your … Trials. It’s the homesickness, redundancy, and loneliness. It’s the thick, sweltering heat while scaling a shadeless, rock-face mountain. It’s trying to sleep through sub-freezing temperatures, hoping that wearing every damn article of clothing in your pack and wrapping your sleeping bag over your head will provide enough warmth to grant a few hours of sleep. It’s the constant swarm of mosquitoes, flies, and gnats. It’s the boredom that comes from another day of walking through lackluster terrain. It’s the pain that strangleholds every muscle of your body upon waking. It’s putting on sweat soaked clothes for the fifth morning in a row. It’s trying to sleep next to that snoring asshole six inches from your face. It’s waking up in a shelter to sound of a mouse eating his way through your backpack. It’s pooping in the rain; have fun trying to wipe. It’s drinking discolored stream water. It’s wandering a mile off trail before realizing you have no idea where you are. It’s checking your nether regions for parasitic and disease carrying ticks at the end of an exhausting day. It’s living in a constant coat of filth. It’s walking consecutive days with a set of throbbing blisters between your toes and on the sides of your heals. It’s veering off trail to go to the bathroom, only to look down and notice that you’re standing in poison ivy. It’s rocks eating through your boots and insoles, making it feel as though you’re hiking barefoot. It’s running through a storm while hearing lighting crash down on every side of you. It’s the rustling of an animal prowling outside of your tent just moments before you were going to fall asleep. These are the reasons people throw in the towel, not because a climb is too daunting. 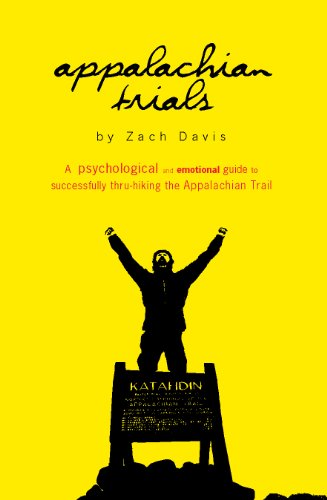 Of the thru-hike trail ‘Trials” that Davis lists, I have experienced: “putting on sweat soaked clothes for the fifth morning in a row.”, being in “a storm while hearing lighting crash down on every side of you”, “the rustling of an animal prowling outside of your tent just moments before (I was) going to fall asleep” and pooping in the woods, albeit not while it was raining. I suppose I have so much more to look forward too!

My sole reason for changing my itinerary and section-hiking back to the Munising Falls Visitor Center was simply to lighten my pack. No more. No less. Even though my pack weight with all my gear, my food for six days, and my water carry was under 45 pounds, I made the mistake (again) of under-estimating the effects of carrying the additional weight and of over-estimating my physical preparedness and the shape I was in (or not in!).

I began the day with an easy pace, felt comfortable overall, but my pack just felt like dead-weight on my back. Approaching the four-mile mark with almost two hours lapsed since I started hiking, I stopped to take a quick break, hydrate, and vlog for the first (and what would turn out to be the last) time that day. My break from hiking was made even more peaceful by the sound of a nearby waterfall.

I reworked my pack, rearranged a few items, and tightened up the cinch straps (side straps on your pack used to tighten the pack contents overall, making the pack smaller, more dense, and more centered on your back). I re-laced my boots, lifted my pack up and on to my back, fastened my belt strap, adjusted my shoulder straps and load-lifters, grabbed my poles, and I was on my way again. 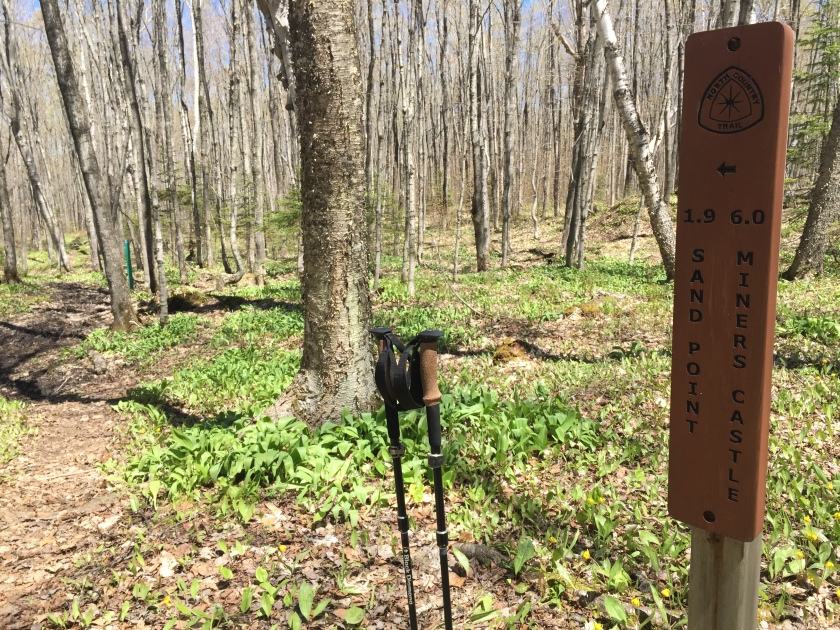 Just before the junction for Sand Point, I stepped up and onto a log with my right foot, forward, and then placed my left foot in front of me to support my next step. As I proceeded in motion, transferring all of my weight from my right leg to my left, my sensory network kicked in and signaled to my brain ‘something was wrong!’ before I ever realized it. Within the next second, the ground between the log which I was standing on and the tree trunk in front of me, the ground which I was now transferring all 250 lbs. of me and my pack to, suddenly gave way – forming an abyss into which my entire left leg disappeared. As my entire body continued forward and down in motion, I was able to reach out and place my hands in front of me, helping break my fall, the impact, and pending face-plant with the tree trunk in front of me. I came to an unexpected, sudden, and abrupt stop!

This event, in general hiking terms, is known as ‘post-holing’ and is actually a very common occurrence when hiking snow covered trails in the Sierra Nevada, like the PCT, and others. It certainly is not listed as one of Davis’ Appalachian Trials! and I would think a much more rare occurrence in the woods or forest. However, yes I manged to do it, and even though no one was there to witness this amazing event, I am sure I did so with ‘swagger’ and it was immediately followed by a verbal burst containing a number of expletives and asking the all to familiar question.

I managed to quickly free my left leg from it’s underground clutches, regain my balance, and with the aid of my trekking poles, carefully stand back up. I have read that in events like this, you need to let the adrenaline pulsing through your veins subside a little, stop and take the time to carefully assess your situation before continuing:

I did precisely that.

Slowly I put one foot in front of the next, took a step, followed by another, then two, and I was carefully on my way, again. A short while later, just as I had the day before, I found myself standing on the trail, looking up in awe, completely unaware of the event that had just occurred an hour ago.  I believe Bill Bryson got it right:

There comes a moment when I look up and notice , with a kind of first-time astonishment, the amazing complex delicacy of the woods, the casual case with which elemental things come together to form a composition that is — whatever the season, wherever I put my besotted gaze — perfect. Not just very fine or splendid, but perfect, unimprovable.

I ended the small trail detour and road-walk, rounded the corner left to the Munising Falls Vistor Center parking lot, and returned back to my vehicle.